Graceland and heading to my parent's

We got up nice and early to be at Graceland when it opened.  Rain was in the forcast so we were hoping to be in and out and on the road before the storms.  We got there right at the time it opened and they already had the first tour on the bus heading across the street. Quite the efficient place.

I have been to Graceland three times.  I do love Elvis.  I have been to his birthplace in Tupelo and drove by his home in Palm Springs... They don't do tours at the house in Palm Springs anymore because it is now privately owned. I have watched most of his movies... My favorite being Change of Habit... Mainly because I do love Mary Tyler Moore and I worked with people with Autism and I shake my head every time I watch those scenes.  Of course, I have listened to a good chunk of his music.

My first time at Graceland was with my dad the summer before heading to Nashville for college, 1996.  We made a trip from Nebraska to Nashville to get everything sqared away for the fall semester and made the detour to Memphis on the way home.

The second time was in 2000 when my roommate from college came down to Nashville and we spent a few days in Memphis... It happened to be a couple weeks before going inpatient for my Eating Disorder. 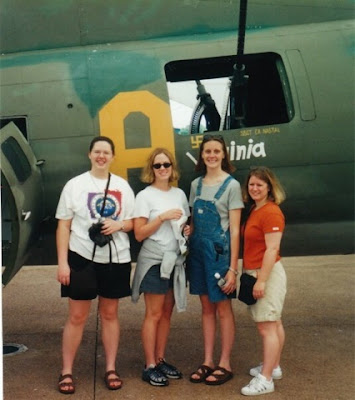 Here we all are in another part of Memphis.  (I'm the 2nd from the right with the overalls)

Michelle had never been to Graceland so we had to stop.  When I went before it was an audio tour with a tape deck... Now it is all on iPads. 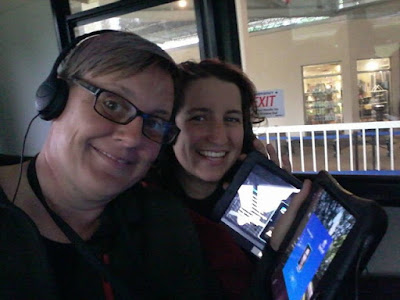 It is really a lot of information and I wasn't much of a fan.  Too many things on the iPad to see while going thru the house and trying to see the actual stuff right in front of you.  It was busy but no waiting on people so not much time to stare at the screen.

We did the tour with all the little museums and the airplanes.  My favorite is the airplanes.  You can easily spend an entire day at Graceland alone... Then you have Sun studios, and all the other cool places to visit in Memphis.  We spent the entire morning and the beginning of the afternoon seeing everything.  We didn't have time this Memphis visit to see anything else but we do want to come back.

Of course we didn't beat the storms... While wandering around the sky opened up and rain came down... Flooded streets and the whole thing.  We hung around checking everything out hoping it would pass but no such luck.  We headed out when the rain calmed a bit but was still riding thru flooded streets and rain.  I wanted to take all back roads to Kentucky because of the weather and I accidentally picked the right one.  We missed the turn to the road I thought we were going to take but the road Graceland is on goes north out of Memphis all the way to Kentucky.   After getting north of Memphis the rain finally stopped and we were just to the other side of the storms for the rest of the ride.  It was another long day but we made it to my parent's house right after dark.

It always feels like it takes forever to get to my parent's house because coming from the west there isn't an interstate or a direct route to their house but it is a pretty ride on the back highways.  After the rain we had pretty good weather and didn't get wet again.

Now time for my dad and I to work on Blue...

Posted by Patches O'Nassis at 3:50 PM