Did I just do that?!

We headed out towards Memphis... Beautiful day and I was excited to get off the Oklahoma roads.  We stopped at the last rest area in Oklahoma and Blue was leaking like I had never seen.  Not sure what the mechanic did in Elk City.  I checked all the bolts on the primary and one of them broke off.  Yikes! 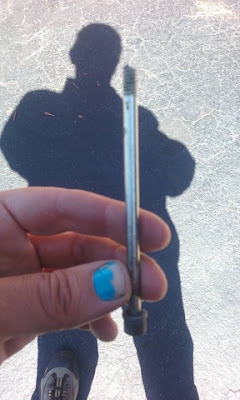 I luckily had cell phone service so I googled the closest motorcycle shop which was the Harley dealer in Fort Smith Arkansas... About 30 miles away.  I called and told them the situation and they said to come and they will take a look but had a rally they were preparing for so they most likely couldn't do anything until the following week.  They said all will be good to get there... Don't add any oil, just come.

So we headed off and made it there no problem.  The service manager came out and took a look.  He said the primary wasn't leaking and put a plug where the bolt broke and said I would be good to make it to my parent's house in Kentucky.  He said there was a definite leak behind the primary where the oring is from the back of the shifter lever and there is something obviously leaking from the front but he wasn't sure where.  My dad and I were going to take a look behind the primary when I got to their house because the shifter lever has quite a wiggle so that and the leak at the front wasn't a surprise.

I was really impressed by the ease of help and it brought back a bit of what Harley dealerships use to be like.  The service manager was awesome and we chatted a bit about traveling and he didn't charge me for his time and the plug. A big shout out to them!

Posted by Patches O'Nassis at 6:41 PM