Oklahoma is that state I try to spend as least amount of time as possible... It may be that I'm a Nebraska girl... Cornhuskers forever. Haha... Or it could be they always seem to have intense storms.

Michelle hadn't spent any time in Oklahoma so we planned to spend at least one night in Oklahoma.  We stopped in Elk City to get a rear tire change.  Another... Should of taken an hour but took 3 hours thing.  The mechanic said he had to put a whole quart of oil in the primary... then started lecturing me on how horrible that is for the bike and I had a major leak in my primary.  I told him how I just worked on the primary and maybe the bolts came loose.  After finally being done and now being completely paranoid that the primary is leaking... A quart of oil low in the primary is all the oil in the primary... I checked all of the bolts when we stopped for the night.

Elk City has a city park with 5 sites with electric and water... And free.  So we got a spot there for the night. 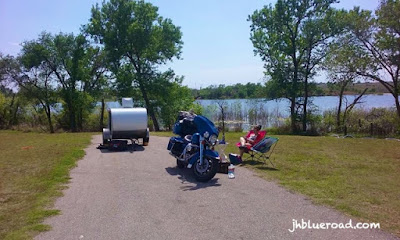 We met some nice RVers who let us fill up our water bottles since the water spicket is under ground.  We relaxed and Michelle made some cornbread on the hiker burner.  Then the storms came.  We stopped at the perfect spot.  Not much further down the road they had tornados.  We just had a few sprinkles and some cool clouds. 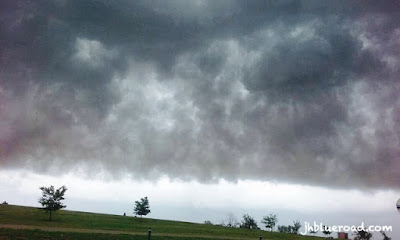 Some locals walking the park told us where the local shelter is in town if the weather got bad... I couldn't imagine riding Blue thru a storm to shelter.  All ended up being good for us.

The next day we headed out and the wind was a little harsh so I wanted to take back roads... We ended up on this detour to no where, stopped in a town and almost got run over by a car who didn't stop at a stop sign while we were walking around and the roads in Oklahoma are atrocious.  I was not a happy camper and ended up making a short day of it and wandered around El Reno OK which was on the list of cute downtowns. 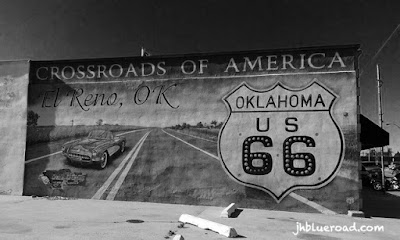 We ended up eating at SID's Diner which was on Man vs Food or one of those shows.  We had their special burger... Wasn't bad.  We enjoyed the burger with a milk shake and then spent the night at the Walmart in town. 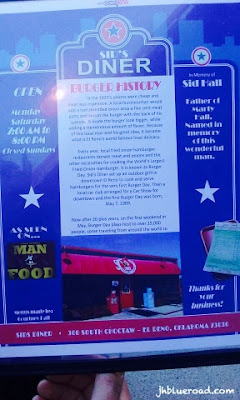 I, of course, checked all the bolts and the oil in the primary.  All seemed good so I was still confused as to what this guy was talking about.  After much thought I realize the guy meant the engine oil not the primary oil, which is always close to a quart low... Blue spits out that last quart as soon as I put it in the engine oil.  So it wasn't new to me but it took days for me to realize what the mechanic was talking about... More on that later...

Posted by Patches O'Nassis at 6:02 PM