Texas and preparing for what's next

After finishing up the Natchez Trace I needed to head to Texas.  I was going to camp on the beach but Michelle and I decided to take a job in California for the winter so I decided to head to Houston a few days before Michelle's arrival to rest up and figure out how we were going to make the 1900 mile ride to our next gig.

It is one thing to ride with just Yoska and I on Blue... Another to pull TicTac and a completely other way of riding is to add a passenger on Blue while pulling TicTac.  Michelle rode with me from Campbellsville Kentucky to my parents house... about 160 mile... With TicTac in tow... It took us a good day of riding since Michelle hadn't ridden long distances on the back of a motorcycle and it takes a lot more energy to add another person to the mix.

We originally planned to work in the Houston area for winter, Michelle flying into Houston after her stay with her family for the holidays, then head to Tennessee to a gig for the summer.  Far enough to feel like we travelled but not too far as our first time out.  I really didn't feel prepared to do 1900 miles.  So, I decided to take a few days to figure everything out.

Plus was I found a free campsite in Thomball TX that had electric and showers.  I could charge up TicTac and prepare for our adventure. 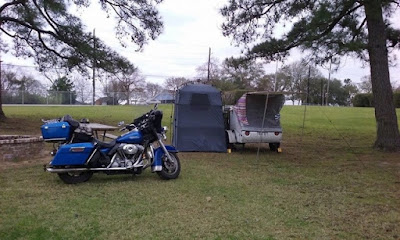 I decided we would ship a few things to our next gig to take some weight and stress off Blue and to also give us more room inside TicTac.  When traveling and only spending one night in a place I don't put up a tent... It's just the space of TicTac.  We would both keep a change or two of clothes and shipped the rest plus extra shoes to the next gig.  That was about 50 pounds of stuff and a bit of extra space... Not much more we could send... Tough part about not owning anything... Haha

I also decided we would probably travel 200-250 miles a day.  Not terribly long days of riding which would give us time to stop and have a meal and a few stops to rest or see things along the way... Plus get us to our stop for the night before sunset.  I also had to make rules for myself.  I normally, just me, would ride thru any weather... Rain, snow, winds, etc... But I have been telling myself that isn't necessary... No place or person is worth putting myself in danger... I decided to be a little more strict with a passenger.  No need to ride in rain, definitely no snow and no winds above 15 to 20 mph.  Depending if we are on the interstate or back roads.  Higher winds on back roads aren't as bad because there is usually less traffic and less semis.  I figured we could do the 1900 miles anywhere between 5-10 days depending on the weather.  You never know what the winds will bring thru the southwest or just how tired we will be.  I wanted no pressure... an enjoyable trip for both Michelle and I.

Once I had a plan and was well rested the 1900 miles seemed doable... then it was about creating a trip that got us to where we needed to be but also enjoyable for Michelle.  I didn't want it to be all parking lots, so of course, I researched some more free campsites.

I was quite excited to share my way of life with someone...
Posted by Patches O'Nassis at 9:24 AM 1 comment:

Heading down the Natchez Trace (part 2)

The second night I stayed at Jeff Busby Park off the Natchez Trace... also a free campsite.  This one was very wooded.  You can hike to the highest peak in Mississippi.  There was one other RV camped for the night.  This one wasn't as well maintained as the Lewis one of the night before but still nice.  Bathrooms were heated and I am always excited by a real toilet. hahaha 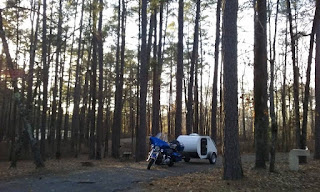 The 3rd campground at Rocky Springs, I ended up staying 2 nights cause of rain.  Next to no cell service and many campers as it is a little over 50 miles from Natchez MS.  I enjoyed my two days relaxing. 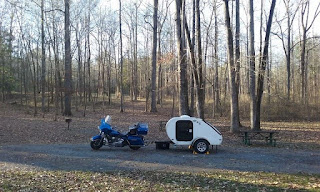 All the campgrounds had heated bathrooms and picnic tables.  These are quite awesome in comparison to some of the other free camping spots I have been to. 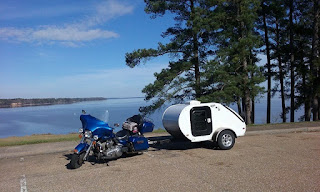 You could easily spend a week or more camping, hiking and riding down this beautiful road.  Only needing to get off to gas or to resupply or even spending a days at some of the historical towns along the way.  If the weather was warmer I could of spent a few more days.

I ended up spending one night at a Walmart outside Natchez MS waiting out a big storm and then headed to Texas. 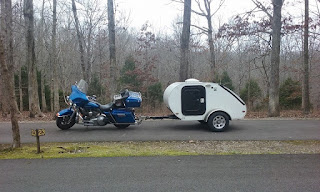 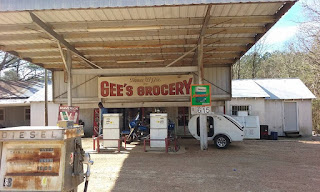 Hi all!  Sorry I have been a bit delayed these last few months.  Finally settling in to our winter position in California.

Over the holidays I went with my parents back to my hometown in Nebraska to visit my nephews.  Stopped in Kansas City to see my younger brother and his finance.  We had a good time and it was nice riding in my parents van and being able to nap along the way.  Yoska enjoyed the ride also. 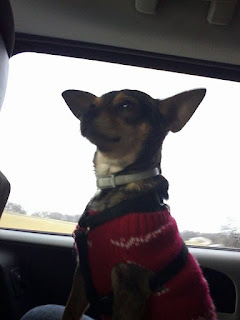 We got back before the New Year and I hit the road.  I stopped off the Natchez Trace in Hohenwald TN to spend a few days with my friend Renee.  We camped together a few weeks last spring.  I wanted to spend a few days with her since she has now embarked on a new adventure of backpacking around the world.  You can check out her blog at http://www.theuniversaltraveler.com.

It was a chilly few days but enjoyed some down time and a bit of local adventures.  We had both worked Amazon.com as Camperforce for the season so we were still recovering. haha 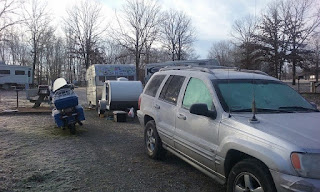 Frost almost every morning... luckily I was able to plug in to have heat when sleeping. 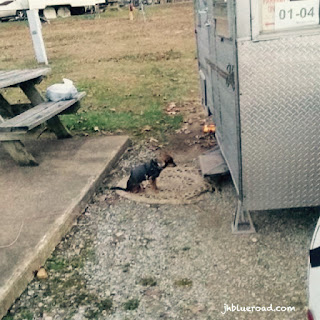 Yoska is not a fan of the cold... waiting for Renee to let him in. 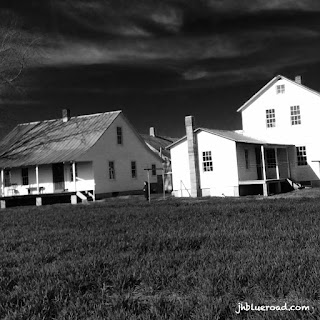 We went thru Tennessee Amish Country to see the farms and such. 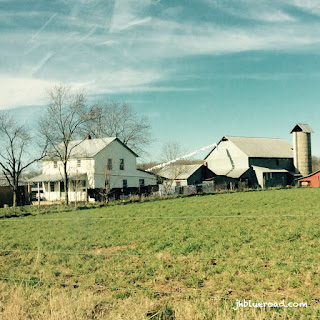 I always like going thru Amish country.  My mom is a Yoder so it is interesting to see the perspective of the Mennonite Yoders I grew up with to the Amish Yoders in these communities.  I didn't grow up Mennonite or Amish so it is always interesting to me.

Renee, Yoska and I had an enjoyable couple of days.  I had a week or so to meander before picking up Michelle in Houston to head to our next adventure.  I decided I would spend a few days checking out the free campgrounds along the Natchez Trace... More adventures to come. :)