Flagging... Don't do that! Part One

For whatever reason I have wanted to try out being a flagger for road construction.  How hard could it be and everyone says you get paid so well.  So, when Michelle and I arrived at our new spot in New Hampshire and saw an ad for flaggers we decided to give it a try.  Mainly because we knew it was temporary until other jobs came through.
First, it is crucial to know it is not a well paying job unless you get in with the state.  We worked for a private company. The rate depends on the job but ranging around $10-$18/HR but from what I hear if you work for the state you are talking $30-$40/HR.
Before we were hired we had to watch a couple videos and take quizzes of pretty obvious answers online.  Then they give you a call and text you a street to meet them on.  Our first day we had to arrive a little early to meet with our trainer. A random residential culdasac with about 3 houses on it in the middle of nowhere.  Our trainer was a guy with that hard Boston accent talking about football, hockey and baseball who couldn't stand in one place.  Right off they tried to pay us less than the advertised rate.  I was sure to put a stop to that right away. He told us the basics of what we needed to do, what we learned from the video.  Then waited for the company we were working with.  We waited over an hour having to listen to sports talk and face palm political talk. 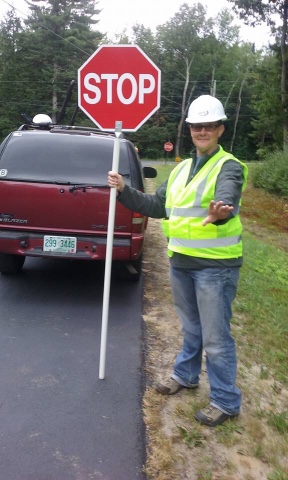 The company finally arrived, Asplundh, however you say that.  We were going to be flagging as they were trimming trees on the side of the road.  Our trainer kept telling us how he didn't like these people but Michelle and I thought they were all very nice.  The trainer also made a big to do over getting bathroom breaks.  I figured we wouldn't have a bathroom around so Michlle and I planned ahead for that.  No fluids for us. Haha. He seemed to think that would be the biggest concern for us.  We weren't sure why, but whatever.
We were the first ones to be fully certified on the same day this whole summer... Actually, in about an hour.  Who knew you had to be certified to turn a little stop/slow sign.  I'm totally putting that on my resume. So we are certified flaggers in the state of New Hampshire.  Every state has different regulations so you have to be certified per state.
The first day wasn't bad.  A short day at 7 hours.  Our trainer said the days can be as long as 15 hours... He didn't know of anyone working longer than that.
A few cars almost ran into each other because those 3 signs before us weren't enough to get people to slow down.  People are insane!  The trainer said if people aren't slowing down make them stop before letting them through.  That is exactly what I did... I treated them like the children I use to babysit who misbehaved.  Made them sit and wait for a minute before letting them pass.  Then there are those people who look like they won't stop at all.  You are suppose to drop the sign and run to the side of the road.  No one really came at me that fast so I would take a step forward, pound the sign into the ground as if I were Gandolf with his staff.  Everyone stopped.  The amount of people who then sped thru the actual part with people working is ridiculous.  Shame on them!!  No matter how much you tell them to slow down with hand signals or just yelling at them they don't care.  This really isn't a surprise for me since I ride a motorcycle and see this kind of crap daily.  People in a hurry, on their cell phones thinking of no one but themselves.
With these people we worked with we got a 30 minute lunch we took on the side of the road as they headed off somewhere for lunch.  It sure didn't seem like much work was getting done on their end. They got a break at 10, noon and we were done at their afternoon break time, 2:30.  I was also shocked as to how many of them would be smoking while working with chainsaws in brush and trees during a drought.  Even when they went up in the lift part they were smoking.  The amount of swearing was also worse than a 90s cop movie.  F this and F that.  A few of them came over to chat and in a normal conversation the F bomb was used every other word.  Guess it was the only way they knew to show emphasis. 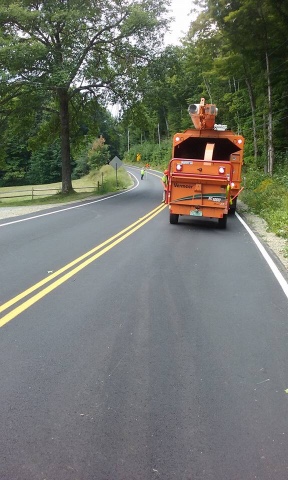 Michelle working hard.
It really didn't seem too bad.  The road wasn't all that busy so Michelle and I could chat a bit over the walkie talkies while we waited.
The lingo we had to learn:
Car coming towards my side...
Me: Clear to send?
Michelle: Clear to send
Me: Sending
Michelle: copy
If it was one car you would say: sending solo
If it was multiple cars you would say color, make of car and last 4 digits of plate of the last car you send thru.
Michelle and I don't know our car types very well so we just used color and the last 3 or 4 digits of the plate:  Red 4532
Michelle: Copy
after the car got to Michelle's side she would say: received red 4532
If there were no cars on her side she would say: all clear
I would say: all clear
but if there were cars we started all over again.
I'm not sure what was so funny... Talking on the walkie talkies, being in my own mind, me doing this job or the cars driving by but I laughed the entire first day.
I learned from my Australian friend that we are called lollipop girls.  That helped entertain me the next day we worked... The entire time with the lollipop guild from the Wizard of Oz was stuck in my head.  I would even do the dance and voices.  Yep, the job was that boring.  The second day we worked with the same company and we had to leave early so it was another easy day.  I did get a little scared for a bit as we were on a weird blind turn for a little bit.  No one slows down after the flagging signs before us so at full speed people would come around the corner and then slam on their brakes.  I had one lady yell at me that I should be elsewhere.  I told her I tried multiple spots before and after the curve but the signs are to advise you to slow down, that a flagger is ahead.  She got quiet and drove thru. One thing I learned from that spot, if you are too far away from the workers people go around you and back into the lane where they are working... Idiots! Hence, having to be in a awkward place on the blind curve.
Our third day, which turned out to be our last day, we worked with a different company.... I will tell you all about that drama and why you don't want to be a flagger in my next post... To be continued!
Posted by Patches O'Nassis at 11:34 AM