The first few days of my travels to Houston were really uneventful.  I had beautiful days after the one windy day where I had to stay in Memphis an extra day.  I knew something was going to come my way but wasn't real sure what it would be.

The third night of my travels I stayed a a Pilot Travel Center outside of Shreveport LA next to the big rigs.  I don't usually do that unless there is no other place to park. 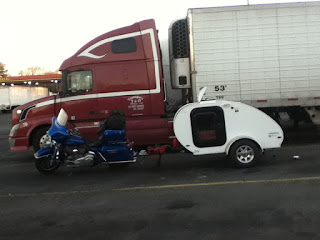 The next day seemed to be going well... got into Texas and headed south.  Only a few more hours before hitting Houston and Blue's battery light came on.  I wasn't sure what was going on but I called my dad who said ride a bit more and see if it turns off.  I had just changed the tail light bulb and for whatever reason every time I change a bulb on Blue the whole electrical system goes whack so I wasn't terribly surprised the battery light came on.  So I kept going.  Then just at the edge of Carthage Texas Blue's battery completely died right at a gas station... thankfully.  So I called 411 and found a Napa Auto Parts that would bring me a new battery.

I had to get the battery out of Blue to tell them what battery I needed.  This nice lady carrying a baby (in one of those holder things that go over the shoulder and keep the baby in the front) comes over and asked if I needed help.  She got her husband to come over with his truck to help me out.  While he was driving over he was going to come right where I had put my travel trunk and this woman, with baby and all, lifts this thing out of the way... when I go to take it from her she tells me not to worry and that I shouldn't lift it.  Seriously... But they were great and got the battery out for me.

I was hoping this might do the trick but not my luck that day.  Blue was not charging the battery at all.  So I had to find a Harley shop on the Saturday before Christmas who could fix Blue and get us back on the road.

Unfortunately I was right in the middle of 2 different shops.  One in Longview and the other in Nacodoches.  I was back and forth with both dealerships for what seemed like hours.  One would tell me the other was closer and back and forth.  Finally the Longview shop told me to come.  They told me to ride until the battery dies again and then they will come get me since the shop was 30+ minutes away.

Well I had to put Blue back together again first.  I was a total klutz and couldn't get the battery back in since I took it out because it was just dying in Blue and I didn't put it in all the way so I could test.  So I had to call Napa back and the guy who brought me the battery came back out to put it back in for me.  Then I couldn't get the trunk back on... talk about getting flustered.  I was on a time crunch.  It was already mid afternoon and they closed at 6pm.  I gave up and put the dogs in with the cat and shoved the trunk into the trailer and took off.  I booked it.  Luckily in Texas the highways are 70+mph.  Not that I would or could go that fast but I did go as fast as I could because I knew time was not on my side.

They were really great to me.  They got me water for my boys, helped me get the trailer off and set so they could work on Blue and they were going to get me on the road that evening even if they had to stay late.  It gave me a bit of faith back in to Harley dealerships.  I have had some really bad experiences and I avoid at all cost but with this I had to go and it was a part that would be under the extended warrantee.

Here is where Harley fails yet again... I have had a problem with my extended warrantee since the day I bought it.  I got the 5 extra years but the person who did the paperwork did it wrong and only gave me 1 more year.  So it expired in 2010.  Every time I have had warrantee work done since 2010 it has been some sort of huge ordeal.  Each time they tell me it won't happen again... it is resolved.  Yet it was not resolved again and the warrantee office was closed Saturday evening before Christmas so I had to dish out the $500+ to fix Blue to get us back on the road.  I am still working on getting this resolved.  With Harley this may be a pain until my 5 years are up.  Hoping for them to resolve ASAP so I don't have to do this again.  I paid the money to have this security and there I was on the side of the road with no coverage for tow or the work that needed to be done.  Luckily Longview HD was looking out for me and helped me as much as they could to keep the cost down and to get me back on the road.

I ended up having to go backwards to get to Longview HD and then even further backwards to find a place to spend the night but I was on the road again that evening before they closed so life was all good.

There are still good people in the world.  Not sure if it was the holidays but hopefully they are there for each other all year round.

The next day I made it the rest of the way to Houston to spend Christmas with my brother.