I guess southern NM is not known for giving anyone space... or to not know what that means.

Yesterday I was parked in a RV/Bus spot at a gas station and taking up a good chunk of it... a beat up old car that was there the night before decided to park right behind me.  There was no room for him so I told him to move and he did.  Not quite sure why he parked there since the entire lot was empty other than the 2 of us.

Then about an hour later this extra extended pickup truck asked if he could park behind me... and still the entire lot was open for his choosing.  I said no because he wouldn't fit.  Well, his significant other pulls up in a van with a trailer right next to me and they both started calling me all sorts of cuss words... still not quite sure what the hell was going on I told them he could park on either side of me and there was no reason to park behind me.  The only reason I could think of is if they are 1. doing something illegal or 2. planning on killing me. haha... so I thought it was a good time to move to a better class of people...

I went to a Walmart parking lot down the road.  Now the Walmart was really nice... no one bothered me and they have a special spot in the parking lot for truckers and rvs.  I kind of had to laugh because when I got there the trucks were lined up one way so I just parked like them and then in the middle of the day the migration pattern changed and I had trucks all around me in all different directions.  So I moved over to the edge of the lot that had opened up.

I had been stuck in the same town for a couple days because of the storm coming thru so the next day I was in the same spot and this semi pulls right next to me... in the same parking spots.  Again with a good part of the lot empty. 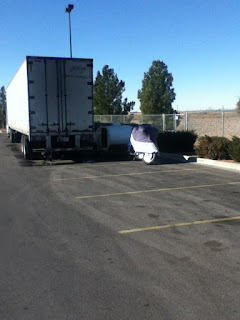 This guy was really nice and asked if he needed to move.  I wasn't going anywhere and he was fixing something and was only there for a short time.  Just made me chuckle that all these people want to share my parking spot.  I guess I need to take up more space. ;)
Posted by Patches O'Nassis at 9:00 AM