We had quite the busy weekend at work.  Lots of people, lots of photos and some very interesting people.  I was a bit horrified by a few people.

I had one family with an adopted oriental child who was probably around 8 years old.  One of the adults who came in and said he wanted to dress the boy as a chinese laundryman.  Then he took the kid aside and told him he could be a Mexican Indian cowboy.  The boy's face just broke my heart so I interrupted and took the kid aside and dressed him as the outlaw he wanted to be.

There was a family with 2 small children and they both had some sort of disability.  The boy, who was 6 was most likely Autistic or a combination of things.  I was quite horrified to learned the parents had absolutely no coping skills for this child and expected him to dress up and take pictures.  The dad got upset because of course the poor boy started to throw a tantrum when the photographer tried to put on a scarf.  I was appalled to hear the dad grabbed the kid by the face and got angry with him.  To keep myself from getting into the parents faces and telling them off I took the kid aside and tried to find a way to get him dressed and calm him down.  I kept asking the parents what the boy liked and they had no idea.  How could you not know your child if he speaks or not??  I was horrified.  They did get their picture done with a little bit of modifications.  Then as they were leaving the grandmother tried to put the little girl who was maybe 2 into the stroller by grabbing her and shoving her in and then repeatedly telling her to shut up as she cried.  This little girl had some sort of issues and I was just appalled.  It is so hard for me not to push the parents aside and do it for them in a less traumatic way.  :(

This last family stuck in my mind the whole night.  I have worked with children with disabilities for years and hate seeing the children in a situation where it is almost impossible for them to be successful.  The only solution I could come up with that would be low cost and hopefully help a little bit would be to put together a PECS (Picture Exchange Communications System) schedule of what will happen while they are there.  Just a simple.  Play Dress Up, Take Picture, All Done type of thing.  And then maybe a few different ones of what the photographer would expect... smile, angry face and things like that.  Hopefully, that will give the people a bit more than just a bunch of words that mean nothing.  Now where to find these PECS... or maybe create something like it myself.

On another subject we had lots of rain storms this weekend.  They just pass thru but it was downpours and small hail every time.  I have never seen it hail every time it rains... quite crazy.  Then on Monday we had quite severe lightning.  It did strike a house in town but I guess it didn't cause too much damage.  One evening there was a rainbow all the way across the sky very faintly.  There was a little portion that nice and bright. 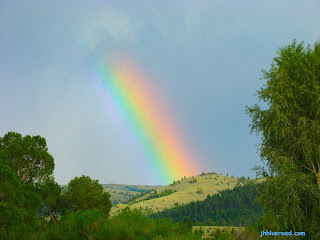 Posted by Patches O'Nassis at 1:23 PM