People have been telling me for quite some time I needed a new seat for Blue.  It is all duct taped and finally comfortable... and well, I never had the extra few hundred dollars for a new seat.  I finally decided as the duct tape was starting to stick to my pants and Blue passed 97,000 miles it was time to splurge on a new seat.  I had no idea it would be a weeks worth of searching to find a new seat... If I had known that I probably wouldn't of gotten a new seat.

I have a solo seat which gives you very few options.  Would love to have a heated seat but couldn't find one.  You would think riding alone they would realize you probably need it more than riding with someone on back but Owell.  I thought I found a newer version of the solo seat I had but it had this weird part in the middle of the seat.  It dipped down a bit and then had a metal harley emblem.  They totally weren't thinking there.  First as a woman who rides I constantly have UTIs.  I ride thru the sun and rain and a TMI a seat that catches the rain is never good when it is your time of the month.  The feminine products in or out soak up that water like nothing.  Haha.. That is why I changed to the Diva Cup but that is a different story.  Anyways... This dip in the seat with a metal emblem that will get nice and toasty in the sun.  My seat could burn my rear on a hot day without metal on it.

So of course that seat wasn't going to work.  I found another seat online and ordered it.  It came a few days later and totally was not a touring seat.  It might have been an 1/8 inch thick and it was at least 1 inch thinner on either side.  So I had to send it back.

Then my dad remembered a guy who reupholstered seats so I called him and it would cost the same as a new seat.  I started searching again.  I called every Harley shop in a 200 mile radius of my parents house and finally found the exact seat I have on Blue.  I called and they said they could hold it for 24 hours.  It was 90 miles away in Bowling Green so I figured my dad and I would take the short morning ride to go pick it up.  They also said they were having a pancake breakfast for extra motivation.  We get up early and hit the road.  It was a beautiful morning and a fabulous ride.  We get to the shop and no where was there a pancake breakfast...  Really fine by me because I don't really like pancakes or pancakes made in masses.  Again, another story.  So I go to the parts department and the lady went back to get my seat and came back with nothing.  She was very nervous because I was really pissed.  I tried to compose myself as we tried to figure out the misstep.  They have another store in Louisville which I had called a few hours before I called this store in Bowling Green.  When I called Louisville they said they didn't have it and when I called the 270 number for Bowling Green they said they did have it.  Come to find out my seat was in Louisville and they were having a pancake breakfast and the woman thought I was nuts.  I know I am dyslexic but I don't make mistakes like that.  I believe the lines are connected and I was transferred wrong but we will never know.  They should see if there was a new girl on the phones that day.  Louisville said they would ship the seat to me and I received it today. 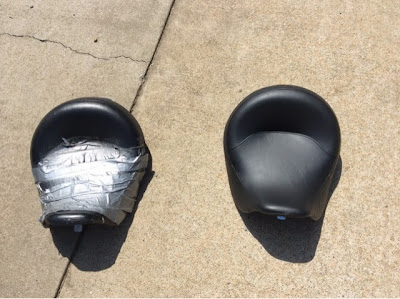 Blue is going to look good.  My dad and I spent quite a bit of time last week getting her ready to hit 100,000 miles (all my miles).  She got new foot board inserts, grips, oil change, clutch adjustment and oil change, transmission oil change, new air filter we are putting on today and a couple new bulbs. She is looking good and riding good.  Excited to get back on the road.  Hoping the weather holds out so I can hit the road in the morning.  Life is good!

Posted by Patches O'Nassis at 5:27 PM