After China, in October, I spent a few days in Thailand.  I was quite exhausted by the time I got to Bangkok so I didn't take very many pictures.  Just kind of meandered the close vicinity.  I stayed in a hostel on Khao San Rd.  So there was plenty to see in walking distance. 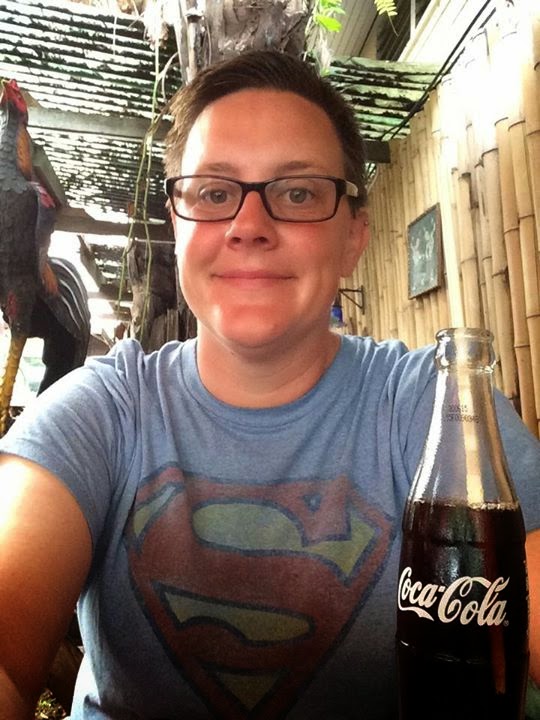 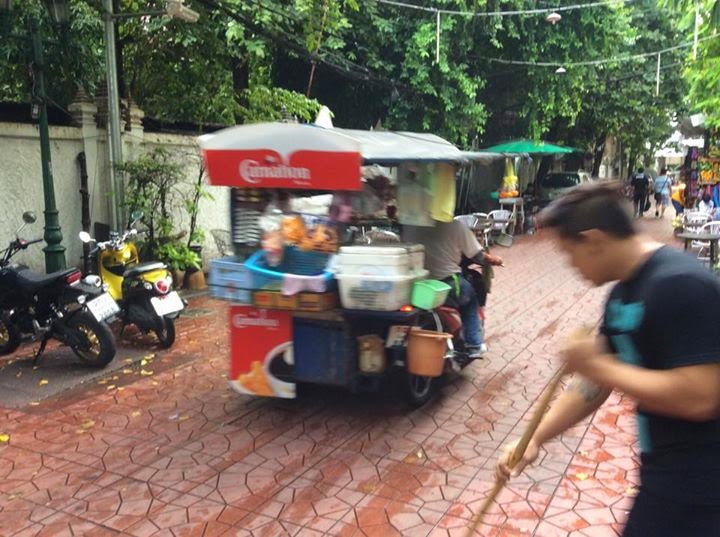 How great to have your store attached to your scooter. 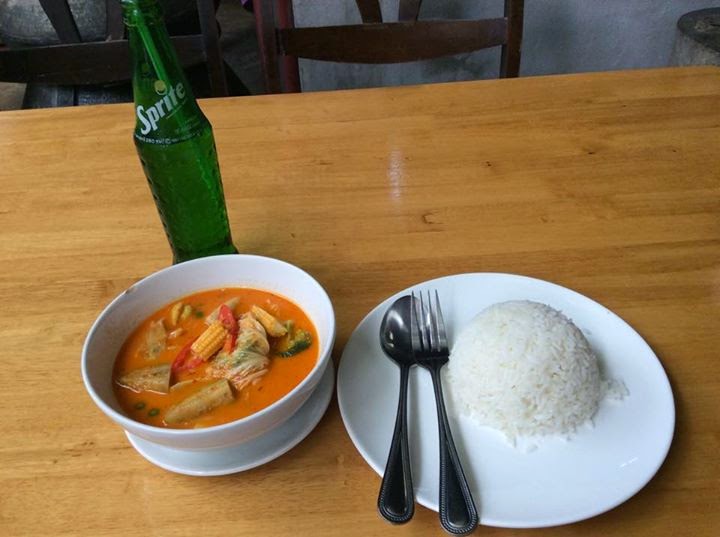 My most favorite Thai meal.  I just have to say the Sprite in Thailand taste funky but the Coke you can get use to.

I had a fortune teller on Khao San Rd who grabbed my arm and put me in a chair to tell me my fortune.  When he was done he asked for money.  I gave him a coin which was worth next to nothing.  He asked me if I thought he was a beggar... of course, I was honest and told him since he grabbed me instead of me giving interest he was beggar.

I decided I wanted to go to Chiang Mai and was going to take the bus.  I had a "that's how Americans die" moment.  I got my bus ticket to Chiang Mai with a travel agent next to where I was staying in Bangkok.  They told me to come back at 6pm and they would take me to the bus... and this bus was going to the center of Chiang Mai.  At 6pm I show up and wait and these 2 men walk me thru this dark back alley to the bus stop and leave me with a group of people waiting for buses.  I don't have a ticket but this lady gives me a sticker.  Another guy comes and takes a group of us down the dark street to the bus.  The trip itself seems to be going well.  The next morning at 5:30am the bus stops at a gas station over 10km outside of the edge of Chiang Mai... in the middle of nowhere.  Tells us that was the last stop and to get off.  They funnel us to these trucks.  I, of course, don't go quietly because it is right off some movie where the American is kidnapped and beheaded or something... and well... I'm twice the size of these people.  I told them I paid to downtown Chiang Mai and how the hell do I get to where I am going.  The other people were going to the bus station and other places.  This lady driving one of the trucks said she could take me.  I get in the front seat and not in the paddy wagon part and she takes me to this shady part of town and told me that was it.

Well, the lady I was couch surfing with gave me directions and landmarks... plus she is from the US and I was most positive would not be living in that type of area.  The driver finally agrees we were in the wrong spot and after a bit of an adventure, dropping off the other people and getting a little lost I made it to my destination.  I think I scared the driver a bit so she was very courteous after the initial WTF. 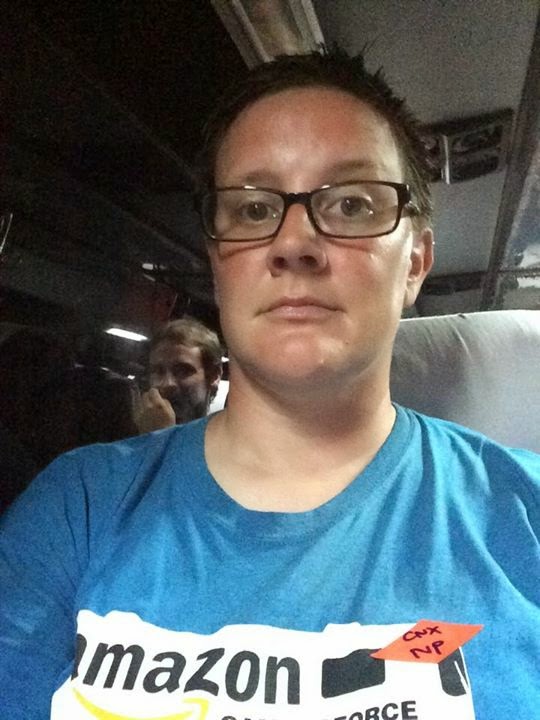 Me on the bus to Chiang Mai. (The Orange thing on my shirt was the bus pass)

I had a great time in Chiang Mai.  I was couch surfing with a few others.  We went to a couple of factories and out to eat. 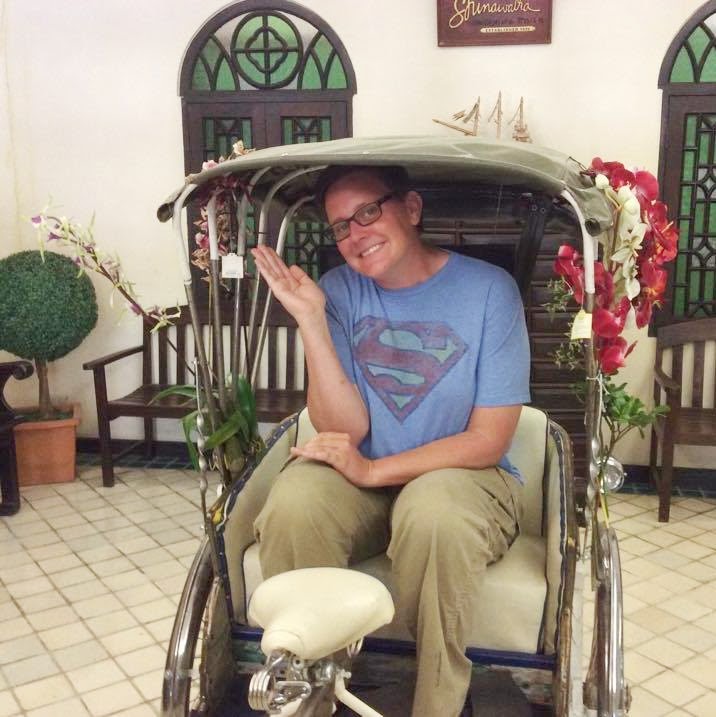 Pretending to be Ms. Thailand. :D 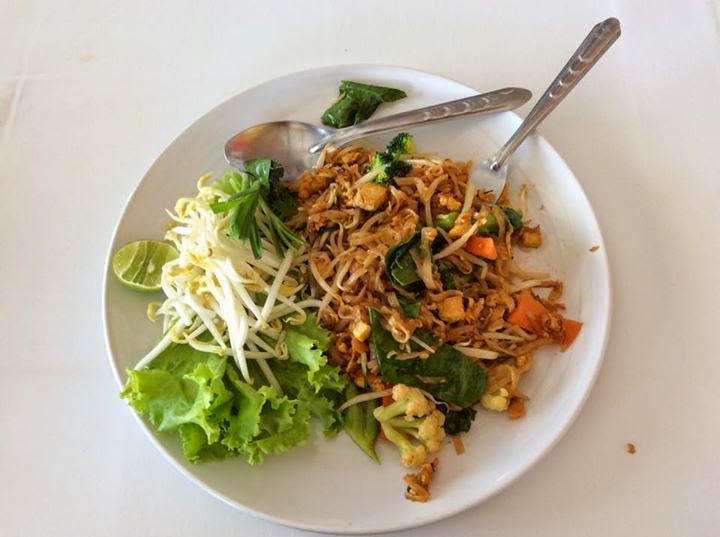 Ate something other than red chicken curry and it was yummy!!

The one thing I wanted to do while in Thailand was ride a motorcycle.  I decided I would ride from Chiang Mai to Pai.  Not a terribly long ride... around 180 miles round trip with over 700 curves one way.  When I told the other women I was couch surfing with they wanted to come along.  So, I rented a 200cc motorcycle and they rented mopeds and we spent the day riding to Pai. 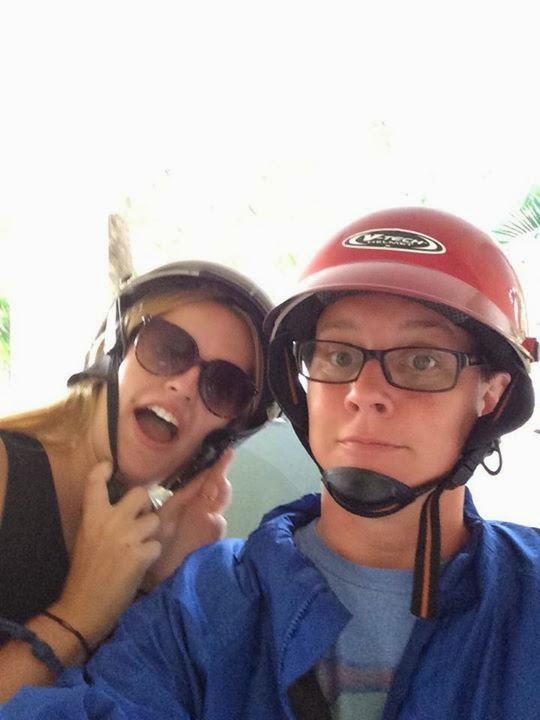 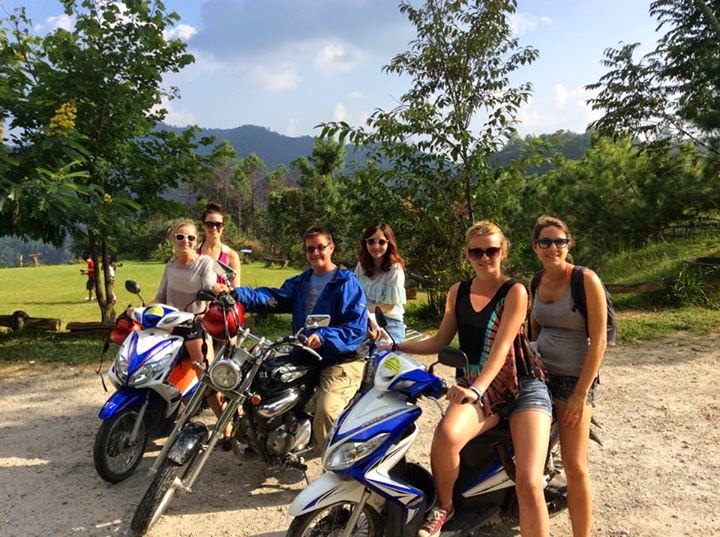 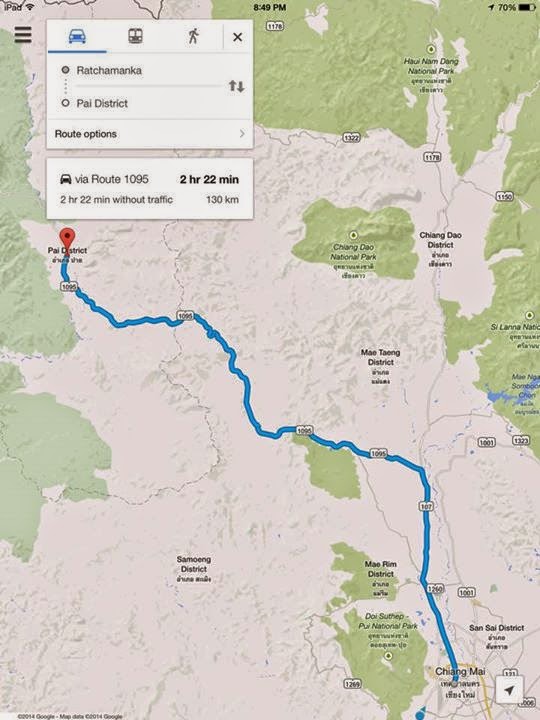 Their mopeds had much more power than my motorcycle.  We were going to stop at a waterfall bu my bike wouldn't make it up the hill.

Me to my passenger while trying to go up the hill.

Me: Lean forward
She leans forward
I keep downshifting
Bike just stops
Me: Get off the bike!! (as it starts to roll down the hill backwards)
She jumps off.

Luckily, there were a group of men working on the side of the road and they grabbed the back of the bike as even with my feet down I couldn't stop the bike from rolling downhill since the brakes were crap.  They held on until I turned the bike around and headed back down hill.

Since I had very little power I had to ride on to get enough umph to get up the hills.  It was quite entertaining.  There was road construction and they don't close the lane they are working on... or have someone there to direct traffic.  It was pretty much go and hope no one comes and then ride right on the fresh asphalt.  I have black marks on my pants as a souvenir of riding on the fresh asphalt. 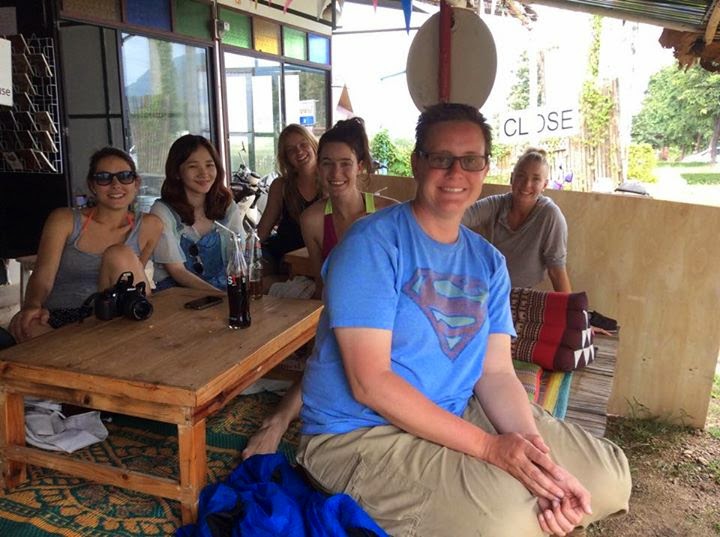 We stopped for lunch just outside of Pai. 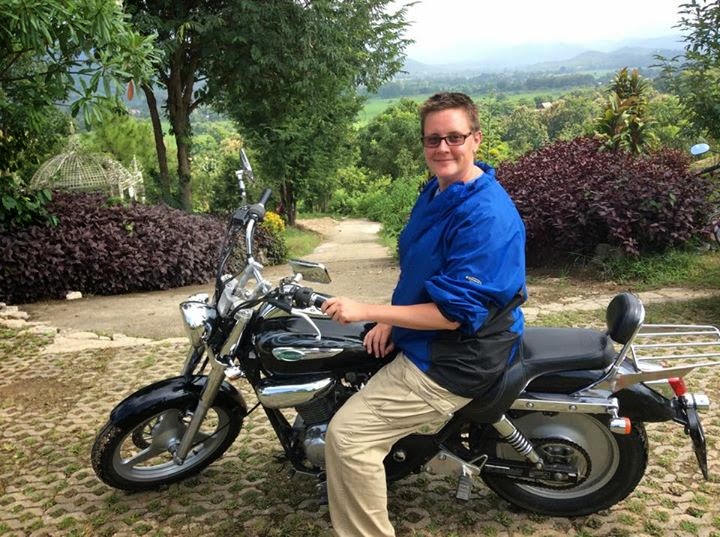 
It took us all day but what a great day.  Love those ladies!!

The last day one of the other ladies and I decided we would get a mani/pedi and Thai massage.  It was so very relaxing and quite funny.  Also super cheap!  We had really great women working with us.  As the lady was scraping the bottom of my feet she said how delicate she had to be... then looks over at my friends and said nothing like her... she is like cucumber. LOL Totally had to be there.  It was natural and quiet.  They washed your feet when you came in teh front door and the place didn't smell like harsh chemicals that some nail salons in the US smell like. 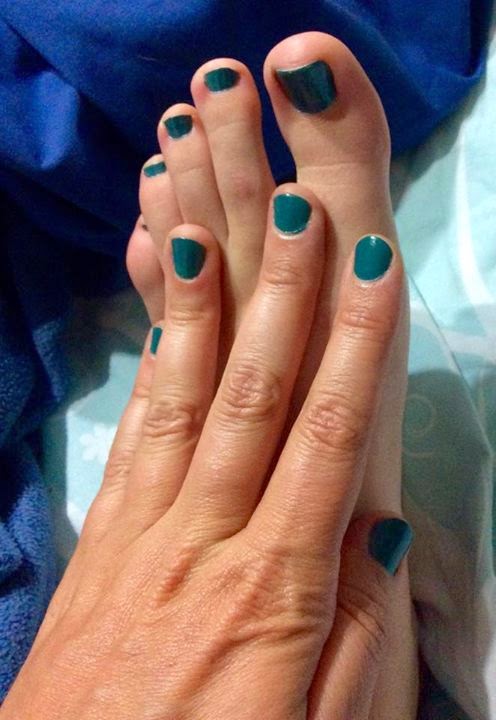 I had never had a massage and this was an interesting one to start with.  Both my fiend and I are tall so it was quite entertaining hearing the women giving us the massage have a hard time stretching far enough.  I, being dyslexic, of course put my pants on wrong which everyone had a good chuckle about.  I never knew my entire right side was ticklish.  Every time she would dig into my right side from head to toe I would crack up laughing.  It was a great way to end my trip.

My friend from Thailand found a bus ticket for me to get back to Bangkok to the airport to head back to the US.  THis one was just as interesting but went to where it was suppose to.  The bus driver was the only person who spoke English and he would come find me to tell me everything I needed to know.  I watched Thai TV for the almost 12 hour trip.  It was interesting because the bus would stop to pick up people on the side of the road and also packages that he would rop off along the road on the way.  So it was a cross between a bus and UPS.  We had to go thru checks where there were officers with big guns... I never saw big guns like that except in the movies or TV.  We never had to get off the bus and left us alone but they would chat with the bus driver and check the baggage departments under the bus.  I was pretty excited I got to sit in the front top of the double decker bus so I could see a lot.

I spent the night in the airport to catch my early morning flight.  Security is ridiculous.  You couldn't even bring a water bottle you bought 100 yards away inside the airport.  They had the first security check then one right at the gate.  Crazy!

Took the long flight home by myself with a short layover in Tokyo.  I was sure glad to be back in the states and very tired.  All in all a great experience. :)

Posted by Patches O'Nassis at 8:51 PM