I have the worst luck with mechanics for Blue.  I had one good mechanic while living in Miami.  He was private and always did a great job.  He told me Blue was a Wednesday bike... she could handle a lot of abuse and keep on going... that I am thankful for.

While I was in LA I needed to replace the pipes on Blue because they Y pipe under the seat had completely broke in half.  This is quite frustrating since I have been to probably 5 mechanics in the last year and no one checked her over to even say the pipe was cracked.  Anywhos, my dad sent me his pipes that he changed out on his bike.  Quite fabulous because I didn't have to spend the chunk of money for new pipes.  So I found this Harley shop in Simi Valley that was about 5 miles from my campsite.  The guy in the service department told me the mechanic working on my bike had over 25 years of experience.  (I always ask since I end up with crappy mechanics and I make it known to the new mechanics just how crappy the last mechanic was).  So they find all sorts of things wrong which I actually knew about but was thankful they looked over everything... well... at least I thought.

I take Blue home that afternoon and then the next morning I hooked up TicTac and was heading into work for the day before leaving town.  The office was about 40 miles away.  I was at work for a few hours and went out to check on the boys in the trailer and noticed that one of the mufflers was hanging kind of low.  I took a closer look to see that it wasn't even connected to the bike... it was hanging on by the connection to the rest of the pipe.  I drove 40 miles with my muffler hanging off.  I could just imagine what would of happened if that fell off... on the freeway... in traffic... while pulling a trailer.  A flat Jack... I would of crashed.

I called the Harley shop and they agreed to come to me to fix it.  I only noticed one muffler hanging but they didn't connect either muffler.  That is what they were working on.  A mechanic with over 25 years experience didn't know it was important to connect the muffler to the bike???  What is up with that?  Luckily they fixed it all before I left town that evening and nothing else fell off. 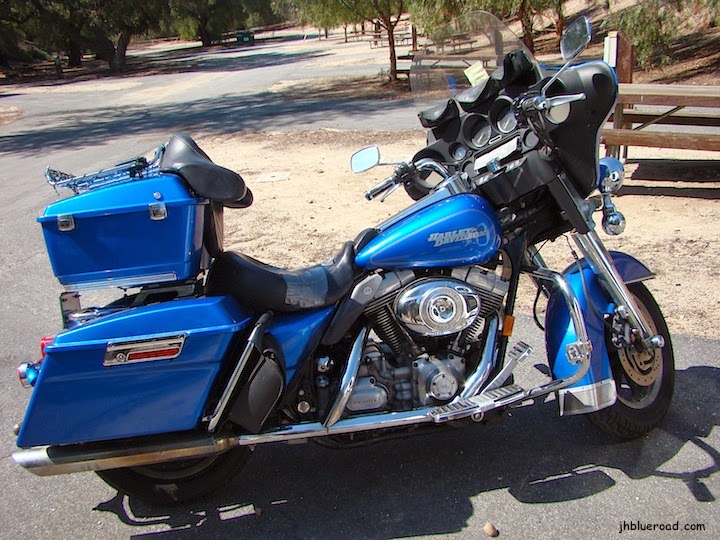 Blue just after getting her new pipes.  Before I knew the muffler wasn't connected.

Then when I reached Yuma Arizona a little over a week ago I needed to replace the brake pads and rotors.  I get all my parts online and then find a mechanic to put them on.  So I called the Yuma Harley shop to see if I could get in on Monday.  The service department said he didn't know when his second mechanic was going to come in that day so I would have to wait all day.  I told him that wasn't a possibility and asked if he could find out and let me know of a time.  He denied me service instead of finding out a time... said they couldn't help me.  Seriously???  Idiots.

So, I called a Honda dealer in town and they said they could get me in first thing on Tuesday.  Great!  I brought in Blue that day and I really should of left.  The guy who was bringing my bike back to the service department didn't know how to start her.  Then about an hour later came to me to ask how to open the saddle bags.  Then after 2 hours I went back to see how Blue was doing because it was only a 1 1/2 hour job.  They said they had problems and I would be charged another $40 and it will be another hour.  They did work without ever telling me there was an extra charge.  Of course I raised a bit of hell and they ended up charging me what they quoted over the phone.  Blue came out ok... she has a weird squeak now I am going to have looked at... but the wheels didn't fall off after over 1300 miles so I think I am ok.

I don't think I am asking too much to have a safe bike... my life might not be important to them but it sure is to me... and that is what I am paying them for.

Are there any competent mechanics out there?  Is it too many fumes that makes their brain turn off??  If I ever find a good mechanic they will get rave reviews from me!  There has got to be good mechanics somewhere... at least I hope.