We are about 3 weeks out from hitting the road again.  I promised Blue if she got us here I would work on her and she is making me stick to that promise.  She has been acting funny while we have been here and the issues can't be ignored.  I decided I am going to try my hand at being a mechanic with a bit of help from my dad, friends and followers. (via phone, email, postings and Skype)  I got around to starting to take Blue apart tonight with Michelle's help.

Here is her issue... she has been sputtering and backfiring and then has a weird clunkity, clunkity sound when she runs for a bit... you can hear at the end of the video.


My dad, his mechanic friend, Wade, from the Indian Dealer in Lincoln NE and I decided to check the fuel pump, fuel regulator for what would be the cause of the sputter and backfire.  Then open up the primary to check the compensator for the clunkity sound.  I also need to tighten up the shifter... so I need to figure that out also.

Today I started taking Blue apart.  Taking off the seat to disconnect the battery which meant I had to remove the tour pack... and look what I found 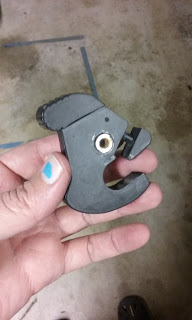 Yep, one of the quick release levers fell right off.  Luckily it should just be the other side of that screw and put it right back on the pack.

Then Michelle and I look down to see this... 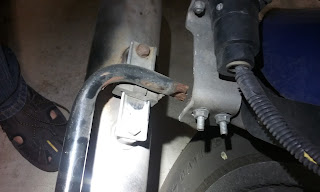 Third time for this piece to break.  Once long before I ever hit the road, one other time on the road and then now.  Not sure when that broke (I check daily on the road) but good to be somewhere where I can just get a replacement part.  Not a cheap part if I remember... will be around $200.

I drained the oil from the primary so I can open it up but realized I need another tool I don't have to be able to budge those bolts... will pick up tomorrow.

Then it was time to syphon out the gas so we could remove the fuel pump.  I bought the syphon with the squeeze ball part... hoping it would be easy.  Of course in the life of Blue nothing is easy.  Since it was rolled up in the package no matter how we put it in the tank it would roll up out of the gas.  So our solution was taping a stick to the hose to keep it straight... we taped every inch that went into the tank so nothing would get into the tank.  We first taped a screw driver but it wasn't long enough... again taping every inch so there would be no chance of a spark from the screw driver hitting the side of the tank. 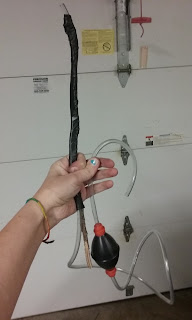 I asked Michelle for assistance and she took over... after a bit of frustration and what felt like forever she finally found the little trigger of sorts... but not really a trigger... you push on it so that it pulls out and away to release the arm so you can wiggle the fuel pump out of the tank.  YAY!!! 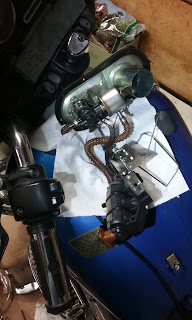 Michelle will get extra bonus points for that effort. :)

The only thing at first glance that looks to be an issue is the plastic casing of the fuel pump that is next to the filter. 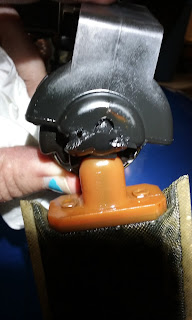 If you can see... it is all melted and gooey... not sure what that would affect but something to look into.

I stopped for the night and will do some more research and such tomorrow evening.  I am a little nervous now I have Blue all in pieces but excited to build up my confidence in Blue maintenance.  I also have a couple of people that I might be able to hire to come over and help if it becomes something I can't figure out on my own.  Confidence is key, I believe.  How else do you learn but by doing.