I spent a few days all by myself at Tamarack Beach just north of Hawthorne NV.  No generators, dogs barking and even the highway that was close by made very minimal sounds.  I stayed offline and just text a couple of friends.  It was FABULOUS!! 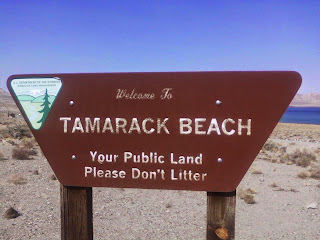 Getting into my spot was a bit interesting.  There are a few things that scare me on the motorcycle... gravel roads and gravel roads that go down hill.  Not sure why I have such a mental block some days when it come to gravel roads but this was one of them.  I totally freaked myself out... quite funny after the fact but frustrating at the time.

I knew from past experience using the brake going downhill on gravel doesn't work.  This is the only time I wish TicTac had brakes.  Braking on a motorcycle with a trailer on downhill gravel just makes it slide... and of course the fear of dropping the bike... with no one around to help you get it back up. (No, I can't lift my own bike... even with the special way... especially connected to TicTac.  The hitch makes it funky and harder to lift)  I know logically if I just drove down the road all would be fine... I am more likely to drop the bike by walking it down the gravel but for whatever reason my brain just stops.  Kind of like when I hike my  mind stops on occasion and I can't figure out where to take my next step.  I just stand there and laugh trying to make my foot move forward.  That was how it was going down this slight... I mean really slight, small, down hill gravel road.

This time down the gravel slope I decided to turn off the bike and use the engine brake... the clutch to walk it down the hill.  Every few feet I would start up the engine and try to talk myself into riding but I just couldn't do it.... so I turned off the engine and walked some more.  Using the clutch was much better for me... not sure about for Blue... but it didn't slide and I felt I had more control... once I trained myself to do the opposite of what I would normally do.  Let out the clutch when I want to stop instead of pulling in the clutch.  I think if the road was straight I would of had enough courage to go but since there was a turn at the bottom of the hill it freaked me out a bit more than usual.

Finally, after what seemed to be forever, I hit a point where I felt comfortable enough to turn on the engine and ride the rest of the way to a spot.

There was a guy that came in during that time... he probably thought I was nuts... but I made it none the less.  Not that I was in a hurry or anything... with a little more practice I will one day be able to ride on gravel like I do on concrete... just not yet.  I'll keep on trying though. :)

I had a nice little spot and I was the only person who spent the night.  There were a few people who would stop to use the toilet or to just stop but it was pretty much just me.

The skies would of been quite amazing at night but it was cloudy every night.

I really enjoyed the time by myself.  I sat outside and watched the cars go by... read a little... listened to my ipod with no shame... and could sing and dance as much as I wanted.

My ipod is about 10 years old and has a little bit of everything on it... from what you hear on the radio to the art songs I was learning for voice lessons... oh, and my friend and I thought it would be interesting to listen to odd and end music from different countries.  Almost 6000 songs and you never know what you might hear.

I had a boyfriend once who insisted we listen to my ipod while making out... I warned him about what was on there but he didn't care.  Low and behold this art song came on and that pretty much ruined the mood. hahaha

I spent 3 nights here and by the last night I knew it was time to move on.  I love the solitude but too much solitude leads to me never wanting to be around people again.  I could totally live a life with very little human interaction.  I do love the text conversations I have with my friends... who kept me company while out here by myself.  It was quite the enjoyable few days.

Posted by Patches O'Nassis at 2:52 PM