Nevada: the roads that lead to nowhere

I am truly loving the riding thru Nevada.  I love the scenery and these roads that go on forever that you feel like you are all alone.  It really should be the state motto... Nevada: The Roads That Lead to Nowhere.

I finally left Pioche NV and tried to find a route without rain and wind in the forecast every day this week.  I decided to head back south on highway 93 and then head over to Tonopah NV.  I also wanted to avoid this Richard Perty Experience thing with all the motorcycles that was going thru the area.  Nothing seems like more of a death trap than being in a huge group of motorcyclists.  Five people is at the top of my limit of people I will ride with and I prefer to be in the back with my own space.  With them but yet not beside them type of thing.

Anywhos... So I head down and get to the turn off to Tonopah and see this sign after the turn off. 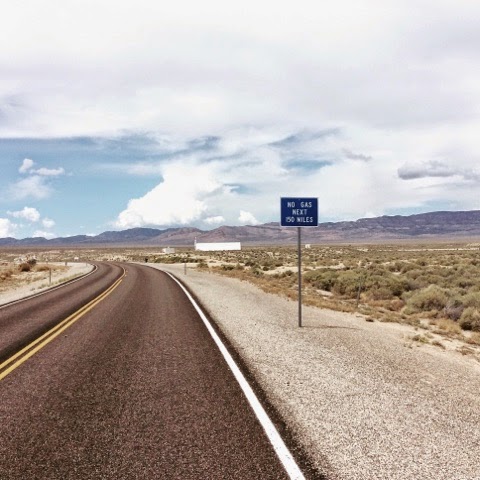 With 60 miles on my tank that wasn't going to happen.  I did know there was a gas station in Alamo about 12 miles from here from when I went thru a few days ago.  So I turned around and went back to the gas station which was only 6 miles away.  Guess who I run into... 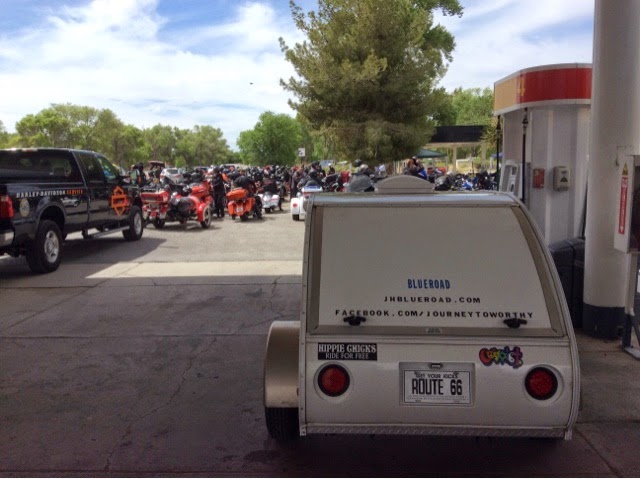 Yep, the group I was trying to avoid.  Luckily they weren't going my way but I was blocked I waiting for them to leave.  A guy came up and told me to watch out that they will try to recruit me... I told him no way... I don't ride in groups.

I waited and debated if I should take that 150 mile stretch or go back to the interstate.  I knew the interstate would be wind and soon thunderstorms.  Didn't want that.  I asked one of the cashiers in the gas station about the road.

Me: how is the road going to Tonopah and what do you see

Woman: the road is paved and a good road.  You see cows.

Woman: well... Actually... The cows are on the road.  It's open range pretty much the entire 150 miles

Me: oooohhh... (I was imagining having to drive thru herds of cattle like you see in the movies)
Something like this for the next 150 miles. 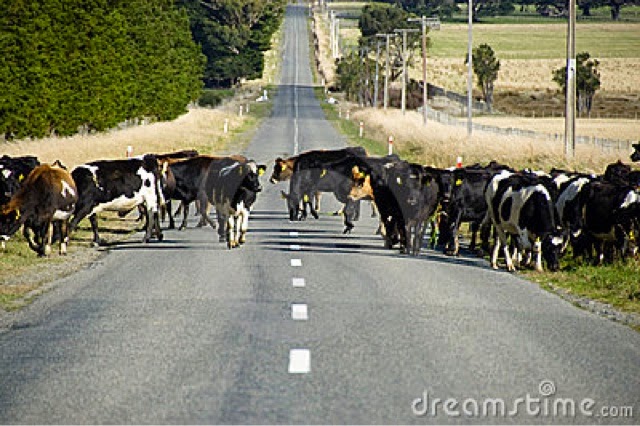 Then I asked: Do you go thru mountains?

After that I figured I could do it.  If it was flat and the wind wasn't bad it should be no problem.  I have an extra gallon I keep with me so I was sure it was full and figured I would fill up using that in Rachel NV 46 miles away.   If it almost filled the tank then I knew I could make it and head on... If Blue used up too much gas and it wasn't close to the full line then I would head back and go to the interstate because no way would she make the 110 more miles. 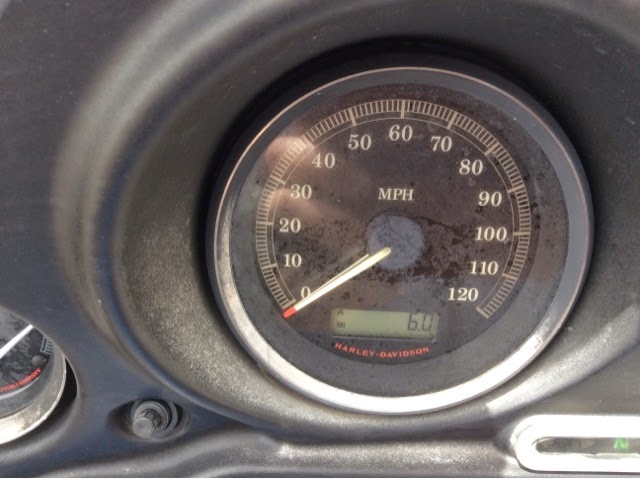 150 miles and the six miles from the gas station.

I get to Rachel and the gallon filled up the tank.  I was quite happy because it wasn't flat.  Maybe it is being from Nebraska... But if there is a sign with a grade % or a place to pull over to put on chains... That is not flat.  If you go up a hill and hit a summit... Can see for miles... That is not flat.

I head off the next 110 miles of nothing.  It was beautiful... And there were cows.  Didn't have any that were on the road but some dead ones on the side... Even a huge cow skeleton on the side of the road.  The cows that were alive stayed in the field.

All was going great... Not much wind... The storms were far off.  I could see the Lightning I the distance.  Really beautiful.  Then about 50 miles from Tonopah the wind picked up and of course we were driving into the wind.  My gas light came on at least 20 miles before Tonopah. (My gas gage is off and has always been off so the light could mean there is nothing or it could mean just be aware but you still have a ways). Then the last 15 miles or so it went straight up a mountain grade.  I just kept saying the mileage countdown... Figured if she didn't make it just get me close enough to easily walk for gas.

We pulled into town and made it to the gas station.  Quite the sigh of relief. 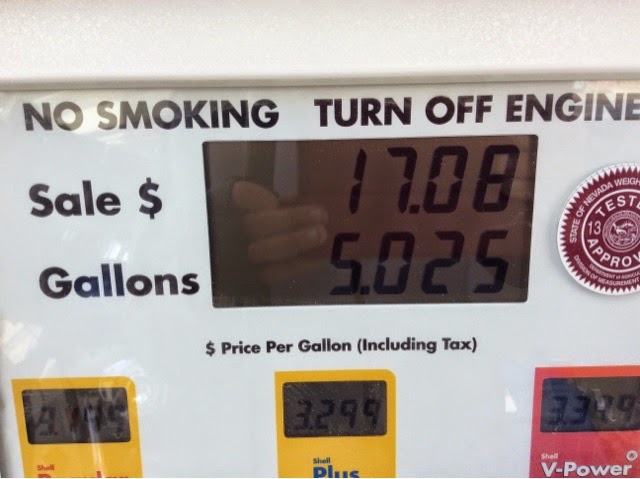 I have a 5 gallon tank and with the extra gallon I put in in Rachel we still had a ways we could of gone.

Quite exciting and a great ride.  Such a good Blue.

Ended up staying the night at a non commercial rest area about 10 miles west of Tonopah. 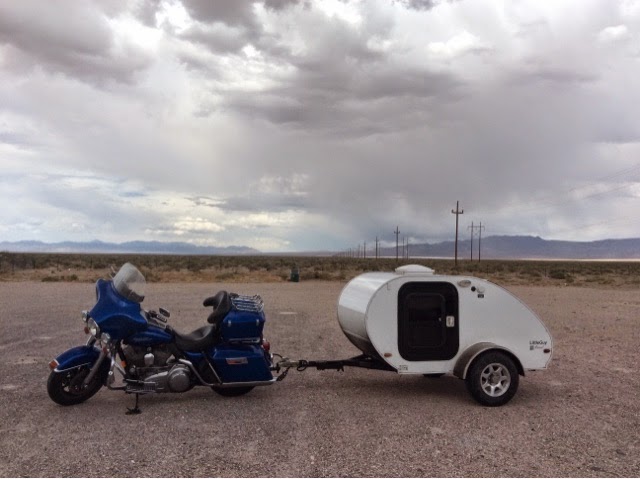 Oh and if you want a hotel to stay at in Tonopah this one might be of interest. 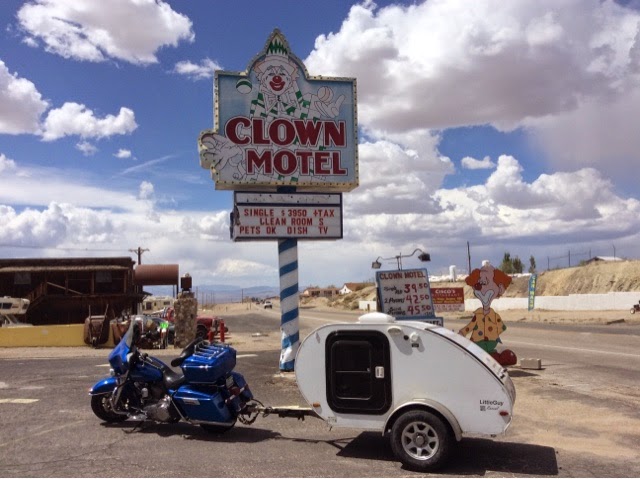 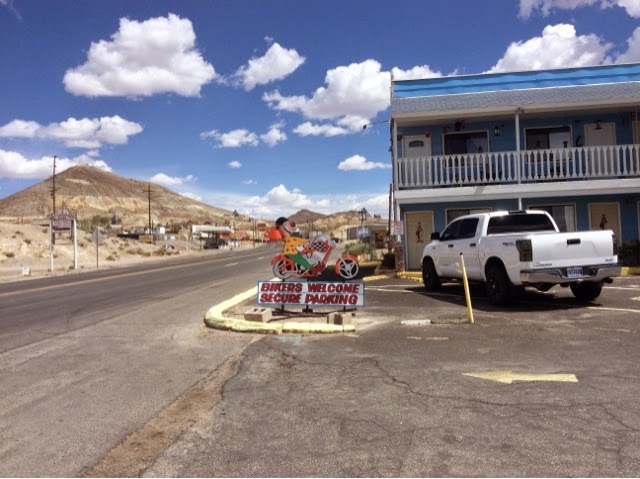