Nebraska is my home state... I was born and raised in Seward.  I was excited to stop by real quick to visit my nephew.  He is 4 and I haven't seen him in person since he was 6 months old.  I have made faces at him a few times over skype but it just isn't the same.  I spent a couple hours with  him and we had pizza .... well I had pizza as he didn't quite trust me.  He was excited when I first pulled up but then he was grumpy for about an hour after that.  It is hard being 4 and having school all day and then someone visiting late in the evening.  He eventually warmed up and showed me some of his toys and such.  Right before I left I let him sit in my trailer.  He was so excited.  He wanted to push all the buttons and look through everything.  I told him when I come back through in August we can go camping.  So I cant wait to come back through and go camping in his back yard.  He was so excited about camping in the motorcycle trailer.  I think I made a good first impression... I mean how many aunts ride around on a motorcycle pulling a trailer you can sleep in. :)

The second day I was making my way north west as I wanted to visit Carhenge in Alliance Nebraska.  I had been having problems with Blue staring on the first try for a few days but that day it got really bad.  I would have to wait around 45 minutes before she would start.  I thought it had something to do with the security system.  I had changed the battery in the FOB multiple times and it just wasn't working.  I tried putting in the code which worked once but the next time it wouldn't let me.  So I decided I had to go get it looked at but the closest Harley shop was in North Platte Nebraska... 65 miles south of where I was.  I made the detour and luckily it was a cheap fix.  It wasn't the security system but something with the starter.  It was a cheap fix in the Harley world... under $50.  She is now starting every time (knock on wood) and they tightened her up so she is running great.  I spend the night in North Platte and then headed back to where I left off the day before.

I did make it to Carhenge.  Just one of those things I have always wanted to see... just to say I've seen it... but had yet to see.  So now it is checked off my list. :) 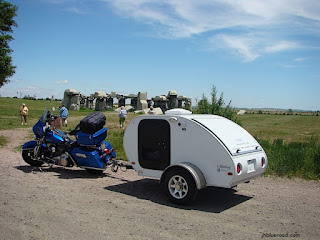 I spent one more night in Nebraska in Chadron.  I know I grew up in Nebraska but boy I could not get over the smell of cattle and the lack of cell phone service.  I had the use of my cell phone in the Walmart parking lot in Seward and that was it my entire rest of my trip through Nebraska.  ATT needs to get it together because their coverage map shows coverage in Nebraska but there is next to nothing.

I was pretty excited to have cell service in the first town I went to in Wyoming.  It is the little things.  Makes me a bit nervous when Blue is acting up and I have no way to call anyone.  Luckily I wasn't stranded in the middle of no where... well I guess if I was that is why I have the trailer.  I would just be camping out on the side of the road until help came along. ;)
Posted by Patches O'Nassis at 5:02 PM