Yesterday my boss came over to tell me the gas man found 2 rattlesnakes under the tank.  He killed one of them but the other one he let be... so I can't let my boys out unattended.

Just so you know how close that rattlesnake is here is a picture.  It is living under that tank.  YIKES!! 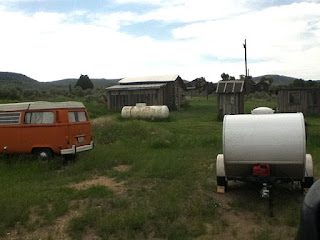 I had been hearing a rattle of sorts but it seemed like multiple something so I thought maybe it was grasshoppers or something.  I was wrong.   I went really close to there earlier in the day to dump Randall's litter box.  I have been putting Poco and Nube out on a lead but I usually had an eye on them because of birds, snakes, bears... who knows what is out there.  It is like National Geographic out there.

I was told rattlesnakes are green this time of year and as the summer progresses they turn more brown.  They came and mowed last night so I would be able to spot him better if he should come out from under the tank.  I asked if the mowing would scare it away.  She just kind of chuckled and said nope.

This morning I heard the sound of a woo of sorts but it sounded almost human and a human in pain.  I have heard this sound before when I lived in the shed in upstate NY.  To say the least I moved the boys inside the apartment so they could run around and I wouldn't have to worry.

I also saw this cute bird this morning.  It was black and white and had somewhat long legs.  So many critters.  Hopefully I will only have to see these from afar.  I surely don't want to know what it is like to be right next to a rattlesnake.
Posted by Patches O'Nassis at 9:00 AM