Sunday I was dropped off at the market I was working at 2 hours before anyone even shows up to set up for the market.  So I had no vehicle and had to sit outside with all the stuff for 2 hours.  What is a girl to do???... 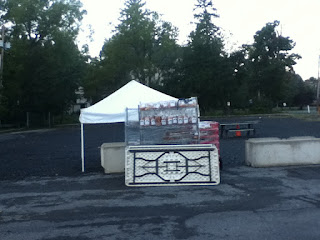 Here is all the stuff... I partially put up the tent so I had a place to sit under once the sun came up.

Yes I was there before the sun was even up... there was the light of dawn but no sun.  I did have a nice view of the sunrise. 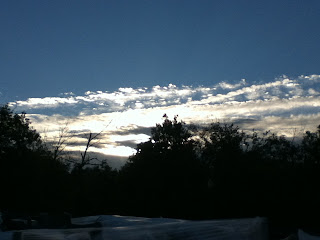 The sun starting to peak thru the clouds and over the trees. 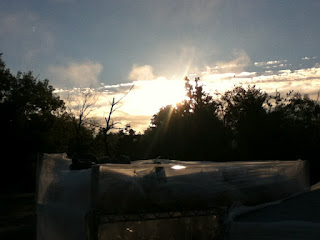 The sun really beginning to make a presents.

Anyways... luckily I came prepared.  I brought my charged up computer and a movie and bought myself some scratch off lottery things.  I brought Bridget Jones Diary for the movie since I checked it out from the library earlier in the week. 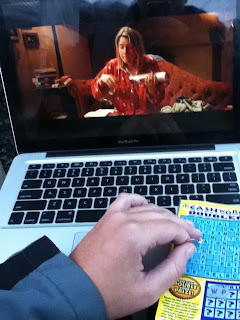 Quite appropriate if I say... this is the part in the movie where she is mouthing to the song All By Myself... and yep could totally relate since I was at the market all by myself. 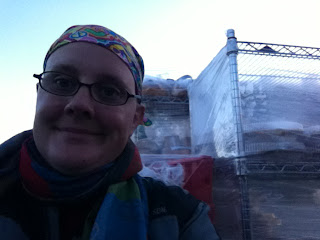 this is me being quite bored but in good spirits.

At least with that scratch off ticket I won $10... pretty much the highlight of the morning... other than when the other vendors showed up. 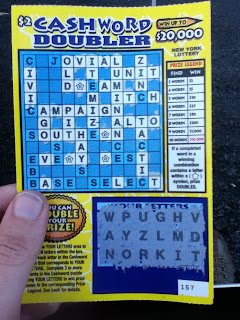 The other vendors showed up and most of the day was spent with an empty market. 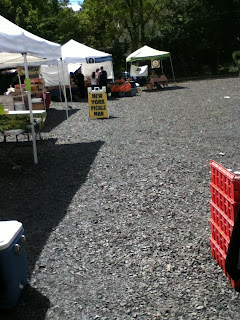 I think it is quite crazy that a small town like this one has a farmers market that no one knows about... and then when people do come they complain there aren't enough vendors... now why exactly would vendors come to a market this slow?  People need to support their local vendors and then more will come.... I just don't get it... but that is another story.

This farmers market has the worst bee situation I have ever seen.  By the end of the day... even the very few customers we did have... wouldn't go into my tent... well neither would I.  I had to have had over 100 yellow jackets in my tent.  They are insane.  They ate thru the plastic wrap on the cookies and tarts and were eating them.  I had to gear up just to pack up my stuff to go home.  Luckily it was cold that morning so I brought a scarf which I wrapped around my neck and face... had a sweatshirt on and the honey lady gave me special gloves the bees could not sting thru.  Even with that I didn't want to go in.  I had some of the other vendors help me out... just ridiculous.  I have never seen that many bees in one place.  We got it all put away and soon after I was picked up again to go back home.  The driver who picked me up and helped me load into the truck didn't even want to tie down one of my crates because there were so many bees inside everything.  I am very thankful I was not stung.  The woman who sells the honey is going to try to find something to ward off the bees for next week.  I hope she finds something.
Posted by Patches O'Nassis at 9:00 AM