I got thru most of Pennsylvania on the first day of my travels.  The weather was so nice so I thought I should ride until I couldn't ride anymore because I knew the weather was going down hill after that.  I rode I-84 and then went south on 99.  It was important to go south because it was a few degrees warmer and that would become crucial the next day.  I rode until after 9pm and ended up at a gas station off of highway 22.  It was getting cold and really dark... I must of been on a mountain somewhere because it seemed all up hill.  Since there wasn't much out there I figured it was best to stop at the first gas station that was well lit.  It was the first night we all spent in the trailer.

I had to figure out how I was going to fit in the trailer since I was also bringing stuff with me I will not be bringing after my parents house.  Luckily the Poco and Nube's crate was collapsable and I could fold it down and put it in the back of the trailer.  So I had a little less than half of the trailer to sleep in with both Poco and Nube.  Randall had to stay in his crate which took up almost the other half.  Of course only having half of the trailer I couldn't use the mattress because that was folded up and under the cupboard.  So I folded up a blanket to sleep on and another one to keep me warm.  All three of the boys did great... there wasn't excessive barking or meowing.  They seemed pretty content and happy to be in there with me.  So the first night was all good.

In the morning I realized I stayed at a gas station without a public restroom... so even on the road I had to pee outside. haha... Luckily I had a lot of practice with that in my shack.

The next morning I took off early in misty rain and a bit chilly.

One thing that is always a pain is signage.  It was all really good on the interstate but you get off on those back highways and the signs are few and far between... or just really confusing.  I almost missed my turn since it wasn't marked ahead of time but luckily there wasn't anyone around and I could go across the other lane to turn left.  Once the sun came up I could see how beautiful that part of Pennsylvania was... rolling hills and farm country. 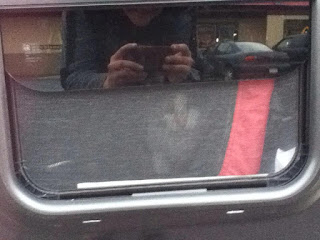 A picture of Randall checking things out from inside the trailer.
Posted by Patches O'Nassis at 9:00 AM